Back to all posts

Roses from the Heart -great news!

Well,a major dream has turned to reality with the news that Cobh Heritage Centre have confirmed that from next year,2013, there will be a PERMANENT tribute to the Convict Women in the Centre as part of the official tour that is offered to visitors.Christina Henri came to Cork in late October and we met with Debbie Walsh the wonderful manageress/curator at the Centre  and she confirmed they will be going ahead with the Tribute.

Its fantastic news and a great tribute to Christina's resilience and belief in what she is doing.It has to be said also that Debbie was a crucial part of this entire process and from my first visit with her back in 2010 she was a firm supporter of the whole idea and concept of Roses from the Heart so thank you Debbie.It was a personal honour to be at that meeting and to partake in the whole process.Christina and myself had discussed back in 2009 how great it would be to see a permanaent tribute there in Cobh and now it's to become a reality it's very exciting.I've no doubt Cobh Heritage Centre will do a fantastic tribute and to know it will be seen by future generations thus guaranteeing that the story of the Women will be told is a very special feeling.

Christina also got confirmation,thanks to the support and dedication of Elizabeth Kerins,the former Curator of the Gaol, that Cork Gaol will be doing a Single Bonnet Display as tribute and this is equally great news as both locations have so much in common with the story of the Transported women.So all in all it was a great week in Cork and it was my pleasure to be part of it.We also had a little time to take a trip to Kinsale and a couple of other spots while Christina was here with her friend Margaret McBride from Kilkeel.Margaret has made hundreds of bonnets and is a huge supporter and friend of Christina and Roses from the Heart. 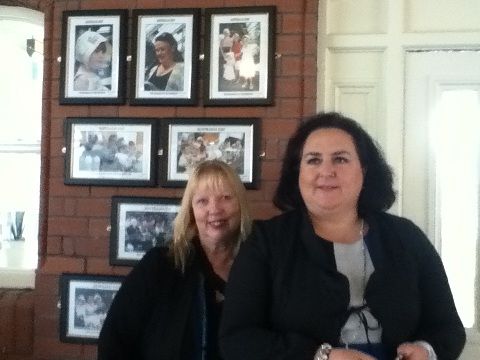